Following on from last session which was a group critique session we had set the task of texturing at least 2 of your buildings (if time permitted dependent on building size) i chose to texture 3 of my current 5 buildings leaving marks and spencers due to size and poundworld as it would be used for a group tutorial in session 10.

Texturing isnt my favourite part of the process but its one you cannot neglect or simply fly by as every artist should know a good model is nothing without a good texture as the texture bring it to life with colour or realism. There are multiple ways to texture as shown in my last year post on texture mapping which isnt all of the mapping techniques maybe just the most prominent ones. For now we are just doing simple diffuse maps for base colours, normal maps and ambient occlusion are to come after possible alpha maps if the building requires that.

During the texturing we decided to leave the windows untextured as a multi subbed objects so that we could find a reflective material in unreal engine 4 that resembles glass to apply to that area for realism, otherwise we would have to texture on a flat black window with a frame which loses some immersion in the game.

Here are my textures crawshaws and quicksilver turned out well but i had a slight issue on cheque centre which i will point out: 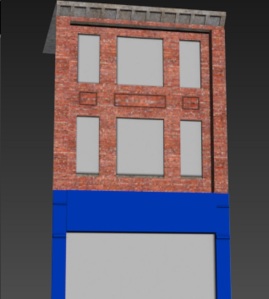 As you can see for the cheque centre (brick and blue building) i must have missed a step of stiching the seperate pieces of the pillars together to the building to create a seemless brick texture, the texture is tileable just its an error on my behalf of positioning. The brick itself is the right size and looks nice though so i have packed my uvs nicely to give the main part of the building higher resolution.

I was pleased how quick silver turned out (red and white building) wasnt a difficult texture really just the seperate colours to uvw unwrap in groups then pack together so i knew which to paint which colour, for the main bit of the building its not plain paint its like a plaster so i have textured it as a plaster.

Then crawshaws turned out just as well as quick silver, i had a slight issue where one uv had been packed into the wrong section so i had a random green part on the white section but simple rearrangement sorted that out. As you may have noticed before i did the texturing i have added a significant amount of detail to crawshaws now all its missing is the elegant flowers on the facure which will have to be sculpted and baked in a normal map later on in the process.

Then gameplay elements had been discussed around the group as for the january hand in we needed to tick the box of an interactive environment which meant gameplay features like pick ups. Phil has been working on this already with a key to open a gate and now we are working for a ladder system to get up on the side of the fire escape on the bank. Previously we already decided on a treasure hunt of some sort but the main theme behind it has now been discussed, i took notes and we came up with:

We thought that maybe a multiple choice of which to do giving you clues to just a certain trail dependent on the players choice would be more personal to the player and adds multiple replayability for different trails. Moving away from types of hunts we thought more mechanics:

A final idea will be pinned down shortly i think we are going for the multiple hunts as it gives up a wider range of asset creation and a better style of gameplay for replayability. The treasure hunt is a really good idea as we can position pick ups in specific places so the the player really appreciates the environment around them.

Moving on the task set of 2 textured buildings by next week had only 3 people manage it properly some had done but had issues. Myself and Phil thought this might be the case as we identified a few previously to be sturggling on textures, so we did a texturing 101 session using my building poundworld. Phil mainly took the session with some input from myself when questions was posed by the group, then i went round and helped anyone who might have not quite got it. It was dissapointing to see not all the group participating in this helpful tutorial which is invaluable to the project and would have benefitted that individual nevertheless the rest of the group really appreciated the peer to peer learning given. Mainly i worked with James on the topics of Pelt mapping, light mapping, stitching and packing uvs for priority to resolution. I believe he now gets the hang of it but if not we will notice on hand in of his building to the engine so it can be resolved and re-addressed. We plan on doing another installment to the texturing 101 series when we move onto normal mapping and Ambient occulsion maps to make the buildings look really nice, showing people how to go about making them in 3dsmax and editing them in photoshop to produce better outcomes on your map.

After this was done i picked up another building which is on parliament street, i am well underway with that as we speak and will post results shortly.

Here is how i did it:

As you can see its all modular and snapped together, then the road to parliament street is angled on 9 degrees to match the direction of the road, all edge snapped and vertex snapped together. We will implement a slight curve in the actual road when the whole system is done to add realism as whitefriargate does rise up in the middle creating a curve.

We plan to do an update video on the project in engine shortly for a detailed visual fly through for everyone to see. Next week hopefully the modular road system will be finished. And everyone has been given 6 assets to do over christmas or before if speed is there with another building. So we are really trying to hammer down now to push the project on, the faster we can build it the more time we have to add and tweak features.

One thought on “Client Project- Session 10”