For this session we had to go into a bit of research in the field of companies logos, identities and brands. For this I would mix a possible range of different versions and maybe different fields so games mixed with TV etc. A useful video if I can find it would be a change of a companies identity over the years. Here is a really interesting video of the transition of logos through the times with one of the most recognisable brands out there with coca cola and its co existence with Pepsi.

The video highlights the slight changes with annotations around the logo like the coco cola wave behind the word added in 1985 or Pepsi’s added colour of blue in 1950. Both really good examples of the evolution of logos in companies. For a games related logo I had to put my personal favourite due to many hours of crash bandicoot played of Naughty Dog and its ident on the crash bandicoot game, i just love the animation of it with the fluctuating paw flying into the logo and the dog house sliding in from the side to wobble its just really nicely made with the sound effects. This logo has stayed very similar over the years as naughty dog studios even with games like uncharted and the last of us being their area of design lately away from previous years of cartoon styled crash bandicoot. 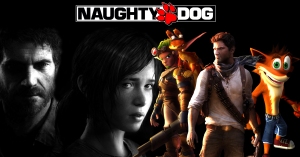 Here’s a nice image of that to show the little change only alterations through the years of different games have happened e.g. the alternating style of naughty and dog swapping styles of black text white background and outline additions. And this video shows a contrast from starting off with humorous style of ident introduction to a game until later on when they moved into more professional smooth idents. my favourite still has to be the original crash bandicoot but I do like the new shiny steel finish to the logo after a block built 3d paw. I tried to find idents that may have influenced future companies to imitate the same style slighty. one that jumps out for me is Ubisoft’s introduction ident  of more recent years not the original which always reminds me of doctor who with a intel styled tune behind it.

obviously minus the tardis and the names but the portal time travel style is very similar I think. So there is a little research on Logos, Identities and Brands which gives a good understanding on what they might be and if tasked with enough research and inspiration I believe I could create my own identity, logo or brand. Actually I have begun that process already.

and then my logo process. Also for our group project of Alaskan secret I designed the logo for that here.

6 thoughts on “Logos, Identities and Brands.”